When one thinks of inter-collegiate sports activities, team sports that immediately come to mind are standards like basketball, volleyball, or football.

In that sense, the Singapore-based PVP Esports Mobile Legends Bang Bang Campus Championship is not your conventional collegiate sports activity. Obviously, it’s not. It’s an esports tournament—an organized sporting competition that uses video games—and universities around the world have begun participating in them in growing numbers.

While some would think this a novelty or even a one-off, think again. Prior to this international esports scene debut, Team Bravehearts has already been recognized as runners up to the Philippine Championship Collegiate League’s Cyber Games Luzon Leg and Cyber Games National Championship in 2019.

Competitive Gaming as the New World’s Tool to Success
Once frowned upon, esports has gradually emerged as a globally recognized sports category and a billion-dollar industry with a market steadily increasing since 2017

It has been gaining global attention and support as it reshapes athletic culture by providing a more inclusive playing field, allowing players of various ages, race, physical, or social conditions to come together virtually and engage in responsible, interactive, competitive gaming.

In 2019 alone, the US-based National Association of College Esports (NACE) granted US$15 million worth of gaming scholarships.

According to NACE, gaming is the largest area of interest for both males and females between the ages of 10 and 20, a fact that is now shaping the corporate landscape. With a huge gaming community equipped with problem-solving skills honed by years of gaming and employers looking for highly-skilled independent thinkers, the employment gap in the field of tech and engineering has found its match. But only if colleges and universities would support and nurture collegiate esports.

In the Philippines, video gaming is still mostly frowned upon in the home and even in schools. With esports now going mainstream, people would hopefully take cognizance of the potential behind what is perceived as just “game” and realize the huge prospects for gainful employment. In fact, esports has already evolved into a multibillion dollar global industry in itself, crossing engineering, arts, design, entertainment, and production. According to Business Insider, this industry is expected to reach US$120 billion by 2022.

Championing Esports
Competitive esports in the country has changed in just a short time. With the pandemic and community lockdowns forcing people to stay at home, more Filipinos have turned to playing video games, particularly mobile games. An article in the Philippine Daily Inquirer says that today, a quarter of the Philippine population—or one in every four—actively plays mobile games.

With this shift in lifestyle and the resulting massive demand of the global entertainment and engineering industries, a number of local universities have already taken initiatives to integrate esports in its programs and student life.

For its part, FAITH Colleges opened a BS Entertainment and Multimedia Computing program focused on mining skills in game development and digital animation. To complement the academic program, an esports student organization is in the works for students who have interest in anything esports.

In the arena of competitive esports, the FAITH Colleges-based United Collegiate Championship League (UCCL) is gearing up as the official Luzon hub for a nationwide esports collegiate tournament for PC-based League of Legends and Mobile Legends Bang Bang.

Taking the Spotlight in International Collegiate Esports
Among its early initiatives to integrate esports to student life is the formation of the Bravehearts esports varsity team in 2019, the very same squad that broke into the international collegiate esports arena in December 2020.

The Road to Legendary
These boys, who came from different backgrounds, all started at a very young age as gamers, one as young as six years old. And yes, they’ve had their share of conflicts with their parents who worried that gaming might get in the way of their studies.

But they all proved that they are responsible gamers, insisting that their studies comes first. Despite the tight schedules of school work and practices, every member has in fact managed to maintain their academic scholarships. “Sa lahat po nito, napakahalaga pa rin po na balansehin ang pag-aaral at ang paglalaro,” Moster said. And this is how they earned the trust and support of their families.

Trials, Triumphs, and Takeaways
Training and practices proved more difficult to arrange given mobility restrictions amidst the pandemic, but the Team was bent on virtually coming together to train tirelessly even in their own homes. Caluban said in an interview, “Kahit po may pandemic, hindi puwedeng mawala ang practice; mahalagang naka-kondisyon kami physically and mentally sa paglalaro.”
Asked about their edge over other teams, Macaso and Caluban cited teamwork, discipline, and commitment to winning.

They all agree that gaming has taught them patience and perseverance. Unlike the wrong notion that gamers are loners, they actually work as a team solving problems, strategizing. “Mahalaga po na may tumatayong leader na magdadala sa buong team. Pero mas mahalaga po na marunong po kayong sumunod, to work well with each other,” they related.

While a few of them dream of becoming professional esports athletes, they know that like any other athlete, being an online gamer has an expiration date. That certain skills can decline with age. And that is why they take school seriously. So they can pursue other careers in esports. They say they want to design their own games someday, while others are considering programming and coding for different industries.

But for now, they are happy defeating virtual enemy forces and earning diamonds to unlock their heroes. One thing is for sure though—they’ll keep their eyes on the diamond to unlock their bigger dreams of transforming to be the best version of themselves. 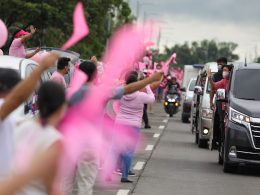 With May 2022 elections looming ahead, the FAITH Alumni Organization has been actively participating in the recent activities…
byRosalind Muñoz-Landicho 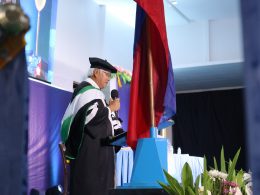 A builder of dreams and a transformational leader, Mr. Antonio “Tony” Meloto graced the institution with the honor…
byThe Editorial Team 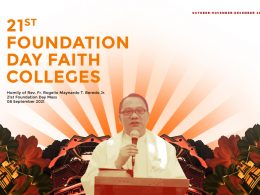 Welcome to the Home of the Bravehearts 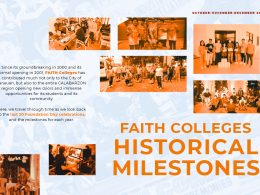 Since its groundbreaking in 2000 and its formal opening in 2001, FAITH Colleges has contributed much not only…
byThe Editorial Team